Welcome to the second in the Inspirational Artisantopian interview series – where I talk to creative people who are using the Internet to support or inspire their creativity and that of others.

Today I’m pleased to introduce you to Ellie Di Julio. Ellie is a psychologist, writer and collage artist living in Ontario, Canada. From her About page:

Ellie, would you mind introducing yourself and describing your creative interests?

I’m a college-educated, pompom-shaking, spirit-seeking, world-traveling, D&D kind of girl. I’m also a small-n-native American who fell in love with a Canadian boy and rushed off to Ontario get married. Art’s always been part of my life in some form or another– writing, sketching, collage, painting, music, photography – but I never gave myself any artistic title until recently.

Writing is my first love. My career began with my mother sneaking blank books from her English classroom for me to scribble in around age five, and it just kept on rolling from there.  I’ve written more angsty poetry than I care to fess up to (although some of it’s been quite good), a couple of novel chapters that never went anywhere, scores of overly-ambitious university papers (who writes a 10-page analysis of Labyrinth?), and I’ve blogged the crap out of the internet since summer 2009.

Collage is my second love, although I didn’t make my first one until around 10th grade (I distinctly remember the center image being the cast of Ally McBeal).  Something about the combination of visual medium and geometric precision combined in one project makes me sooooo happy; it’s an incredibly zen activity for me.  Sadly, I had to throw out 95% of my work in a bedbug scare, but I’m on a steady clip to replace what I lost. 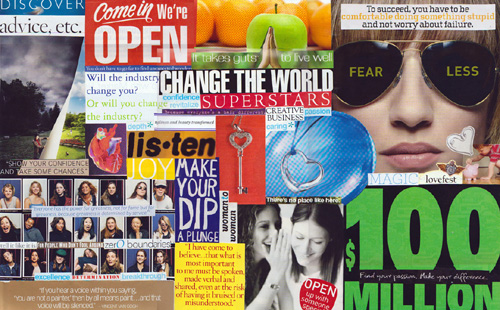 This is going to sound so cliché and woo-woo, but I don’t have any writing tools aside from my brain and something to write with (usually my laptop). I’m not a novelist, so I don’t need stuff like Scrivener or index cards. I just kinda roll with whatever’s knocking around in my brain that day. That’s not to say I wouldn’t benefit from a system – I lose about as many ideas as get written – but I never seem to get around to it. Controlled chaos, that’s my tool.

For collage work, there’s nothing better than a big ol’ stack of magazines to get my motor going. It doesn’t matter if it’s Dig BMX Magazine or Gourmet or Vanity Fair – if it’s got pretty pictures and snappy advertisements, I’m there. I’ve got to admit that I’m a bit of a glue snob, though. Elmer’s makes this gel gluestick that’s perfect for collage, but of course it’s not available in Canada. Give me a tube of that, scissors, magazines, and cardboard, and I’ll be happy all day. (Scanners are helpful, too.) 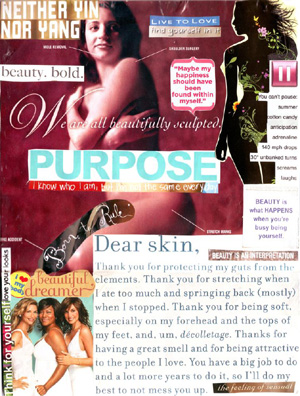 You mentioned to me that you have a new found love affair with Pinterest as it supports your collage practice. Could you describe how you use Pinterest and what you love about it?

I dig Pinterest because it’s so stream-of-consciousness and vast, yet it’s fixed and limited. You can surf images for literally hours finding just about anything, but there’s only so much variation and once you pin something, that’s where it stays. It’s kind of like the ultimate collage system – just about any material you can dream up and a huge amount of space.

Lots of people have used Pinterest for vision boards, which I haven’t done yet. The boards I curate do have that vibe, though. I’ve collected images that sing to me, make me teary or happy, or are outright dreams for the future. The “Good God” and “World View” boards are my personal favorites. 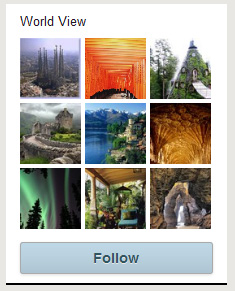 Where do you go, online and off, to replenish your well?

Away from the computer! Seriously, I’m online about 10 hours a day between writing, blogging, Pinterest, Twitter, and my job. Whether it’s heading outside or LARPing or cleaning the house, I get crabby if I don’t unplug at least once a day, and if I don’t have occasional long-term breaks from my desk, I turn into a Grumpasaurus Rex. And that’s no good for anybody.

That’s not to say I don’t have online refuges. I love my Goddess Circle peeps, and I have a list of Secret Favorite Blogs that rev me up. Although it’s embarrassing to admit in public, the most common places I go to turn off my brain (besides Pinterest) are Neopets and Kingdom of Loathing, two free online games. Yes, I’m an enormous dork.

When we first made contact about this interview you talked about how you have been on a journey to accepting that you are a writer. Could you describe how you struggled with this and how you are now embracing your calling to write?

For 20 years, I had it stuck in my head that to be a Real Writer you had to be published, and someone had to give a crap about what you wrote (Mom doesn’t count). It never stopped me from writing, but by my own definition, I wasn’t a writer and probably never would be.

Around early 2009, though, I started getting an itch telling me I needed to do more writing. This led me to start my now-defunct first site, JakaMerriman.com, and dive headfirst into the blogosphere. But something was still missing. I clearly was published in my own small way, and people gave a crap about my writing, yet I couldn’t call myself a writer. I threw epic tantrums over my perceived lack of skill, talent, and luck, sobbing because I felt I couldn’t hack it.

The 2010 World-Changing Writing Workshop changed that. There, I found myself immersed in support; every single person I talked to loved my writing and called me a writer. Me, a writer! Whether it’s healthy or not, that reassurance from strangers is what triggered my own acceptance of the term. The veil lifted, and I suddenly saw my work as worthy and real, even if no one ever read a word. One day, I shouted “I AM A WRITER!” over Twitter, and bam! it was so.

Every day since then has been another step toward really owning the art, stretching my boundaries and growing as a writer. I’ve only made peace with the idea that my story, my life experience, is valuable and interesting to other people in the last two months, for example. I also finally gave in to the universe’s insistence that I start a daily writing practice (16 days and counting!). Now that I can truly and confidently call myself a writer, I’ve got this gigantic, boundless space to explore within myself. How exciting is that?! 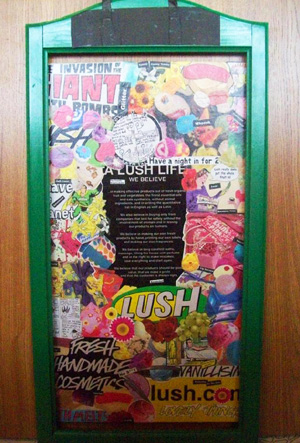 Possibility is one of my favourite things!! Thank you so much Ellie.